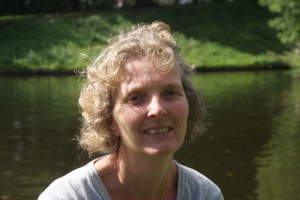 armencita was born in 1966 in Haarlem (the Netherlands), grew up there, and currently resides there. She cherishes her memories of wandering for hours, with only her dog, along Haarlem’s canals as a child. After finishing secondary school, she studied accounting and worked in this sector. She married Marcel; their children Maaike and Job were born in 1995 and 1998, respectively. It was about then that she started on her path to further personal development. She studied the Archangels in depth and learned to meditate. In addition, she took an interest in the deeper meaning of illness – what are your body and soul trying to tell you when you’re ill?  Later, she also studied the nature spirits and took courses from Nicolaas de Jong and Hans Andeweg. In 2005 she crossed paths with the Zonnetuin and she took every course it had to offer, eventually becoming an intern for several years. In 2012 she joined the foundation’s board.

For many years Carmencita had a small allotment garden in the centre of the city, right behind her home. In 2012, she finally acquired a larger garden in the south of Haarlem near the river Spaarne, in an area surrounded by water and wetlands. She has a wonderful garden there, with an orchard, vegetable garden, compost area, apiary and a small building where she can teach. She is working hard on building up the garden and strengthening her connection with all spirits. It is quite a challenge to combine a job and bringing up children with keeping up a garden. To organiseing activities in such a way that you can do everything in the garden and life, at the right time. For a long time she thought this was not possible, but now that she knows from deep inside that this is her path, she can do a lot more than she thought.

Working dynamically in the garden is of priceless value to Carmencita, a value she had never dreamed of. The peace and quietness around her, establishing the connection  between the spirits of Mother Earth and the Angels from the planetary spheres, so that a little piece of the Earth can be whole again – the fact that a human being can accomplish all this, is amazingly valuable. It educates and develops you as a person, because the garden is a mirror of yourself, while at the same time, you’re helping the Earth to develop. Although the desire to share all she has come to know has been smouldering inside her for a long time, suddenly things accelerated, much faster than she thought. She looks forward to inspiring people, and to sharing her knowledge and the ideas behind the Zonnetuin.